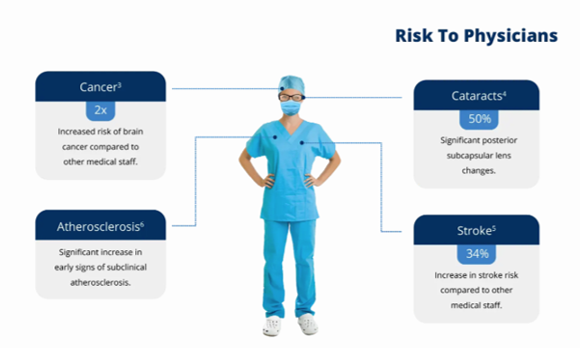 Doctors Nicholas Frane and Adam Bitterman of New York wrote in a 2020 article for the National Center for Biotechnology Information (NCBI) that radiation protection and safety is a concern for physicians, staff, and patients. This concern is across several departments such as radiology, interventional cardiology, gastroenterology, as well as others. They stated that radiation emitted during fluoroscopic procedures is responsible for the greatest radiation dose – and risk – to medical staff. There’s little argument to these points.

Omega has collected and posted several studies and articles on the risks of ionizing radiation. These are categorized as risks to patients, risks to patients and staff, and risks to the medical staff – the interventionalist and their team.

Hospitals follow the principles of ALARA – as low as reasonably achievable. ALARA assumes that no dose of radiation is safe and that every precaution possible should be taken to prevent radiation exposure to patients as well as to the medical staff that treats them. But ALARA relies mainly on guidelines and training. These efforts are not always consistent in practice patterns, the complexity of procedures, or patient characteristics. Therefore, the actual effectiveness of ALARA can be compromised and the risk of radiation can be increased. 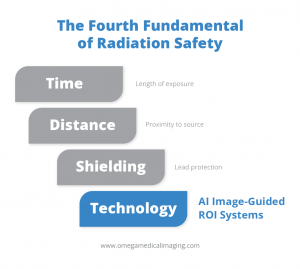 But not all technology is the same. Nor is all available technology universally adopted. Despite the claims of many manufacturers and the misperceptions of many in healthcare, the reality is technology is not always immediately adopted. Such is often the case with new technology – even when the benefits are proven to be dramatic.

ROI (region of interest) technology is proven to provide significant results in radiation reduction. Still, ROI technology has not yet been universally adopted by all manufacturers. Nor has AI image-guided technology that automatically collimates to the ROI – reducing radiation exposure by up to 84% without any interruption of existing workflow.

Why has ROI technology not been adopted across the board? We can’t tell you that. We don’t understand it either. If you knew you could reduce radiation risk without changing your workflow and still get the image quality you need, why wouldn’t you do that?

Omega’s ROI and AI technologies take increased safety to another level and reduce radiation exposure to everyone in the lab – not just the physician, but to the staff and patient as well. And they do so within the cost of an X-ray system – not for an additional cost in funds or footprint – and without impeding existing workflow.

Omega systems allow physicians and hospitals to provide the best care and radiation protection to their patients as well as to their staff – improving the radiation safety of everyone.

What is a Cath Lab?

A catheterization lab, commonly referred to as a cath lab, is an examination room in a hospital or clinic where... 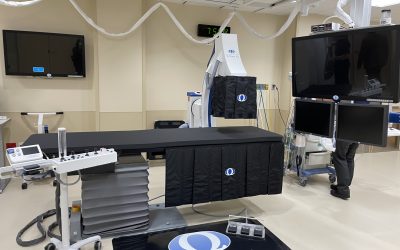 Gundersen Leads the Way in Radiation Safety for Wisconsin

The Digestive Health and Surgery Institute will present the AdventHealth Updates in Gastroenterology and Hepatology on...